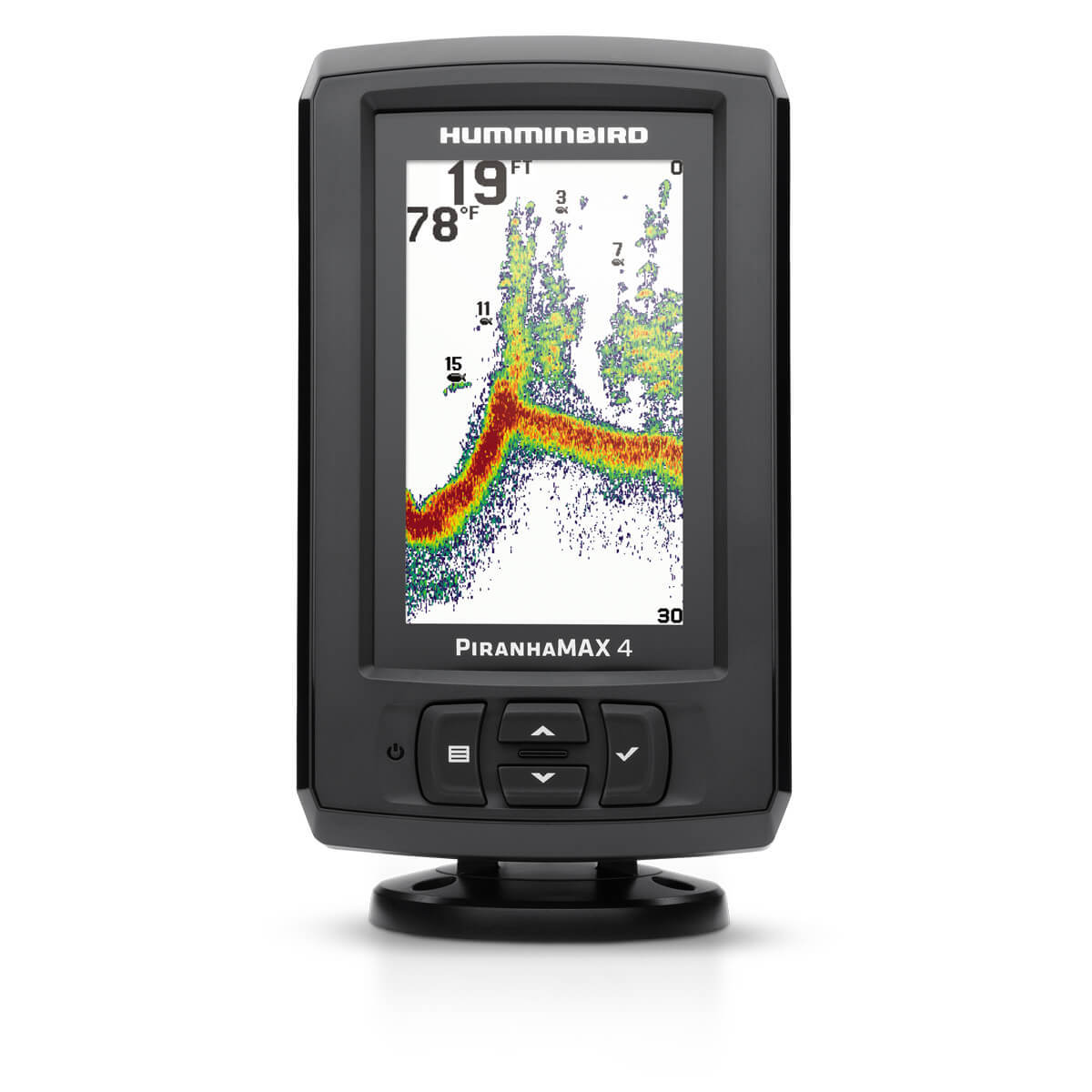 When I was a kid, my friends and I used to fish from this old leaky rowboat. We packed it full of our tackle boxes, fishing rods, a minnow bucket, life jackets, towels, and a picnic basket that our mom filled with sandwiches and a thermos full of Kool-Aid. We would leave the boathouse and row around the point to a small bay that we called Beaver Fish Bay. It was probably no more than a quarter of a mile from their dock, but to us, it seemed like miles.

As an adult, I now believe there were plenty of fish in Beaver Fish Bay, we just weren’t going to catch them sitting in the same spot. If we had had a fishfinder, like the PiranhaMAX 4 DI that I recently used on my kayak, we probably would have been able to find the bass, pike, and perch that my dad always seemed to catch no matter where he fished.

The PiranhaMAX 4 Fish Finder is one step up from a basic fish finder and is a good value for the price. Cory is a casual sport fisherman, and he fishes often from a kayak or other small vessel. Many times, he rents small boats when he is traveling. He told me that he was looking for a fish finder that he could transfer from craft to craft and one that was not overpriced. The Humminbird 410150-1 PiranhaMAX 4 Fish Finder fit the bill.

The PiranhaMAX 4 Fish Finder has a 4.3 inch TFT LCD screen with 256 colors and a 480 x 272 pixel screen resolution. The screen is back-lit, which makes for better readability both in bright light and at night.

The graphics on the unit are simple and provide information about depth, temperature, and fish location. While the unit does not have a split-screen function, it does have Fish ID+™ technology, which takes the sonar signals and translates them into not only the location but also the relative size of the fish.

Targets that are suspended in water show up as fish icons on the screen rather than as arches; although, if you prefer to read arches on the sonar, the unit will let you select that option. While the technology is sometimes mistaken, it still is a good feature of this unit. This device also tells you whether you have a small, medium, or large size fish, and, therefore, helps you to weed out the visual noise to clearly identify your target.

The device also has a zoom feature which allows you to get a closer look at a specific area and to learn more about the underwater environment.

The device has both a DualBeam PLUS and a Down ImagingⓇ Sonar. While it doesn’t use CHIRP technology, the combination of 2D and Down ImagingⓇ combine to give you accurate information about what it under the surface of the water.

The dual-beam transducer has a 28 degree angle at 200 kHz and a 16 degree angle at 455 kHz, which provides you with decent fish spotting up to 600 feet. The DualBeam PLUS emits cone-shaped beams, but only uses one beam at a time. The two beams do not work simultaneously.

However, the down imaging function issues a much wider and flatter 74 degree beam . Think of it like a scanner. The Down ImagingⓇ technology identifies targets up to 320 feet below the surface.

The combination of the DualBeam and down scanning helps you to separate your target from structure and cover. The unit boasts 2.5 inch target separation, which is quite good for a fish finder in this price range. In fact, the unit displays mud, sand, or descending earth as darker images. Underwater rocks, wood, or rising terrain presents as lighter shades. It also has a White Line feature which helps you to clearly identify the bottom.

The unit provides the clearest target images at speeds of one to six miles per hour; however, it will provide viable readings up to 30 miles per hour.

While the PiranhaMAX 4 does not have a touch screen, which I would prefer, it does have simple, easy-to-use keypad controls. There are only four buttons: Power/Menu, UP and DOWN arrows, and a Check/Enter. The interface is easy to use and relatively intuitive if you have used any product like this before. If you haven’t, the manual is clear and helpful.

The device uses a 12 Volt rechargeable battery, making it easily portable. However, the ability to recharge is you are away from civilization may be a problem.

The fishfinder provides battery, fish, and depth alarms as well. Alarms are helpful tools since fishermen are often multi-tasking. For each alarm, you are able to select the battery level, fish size, and depth at which you would like it to sound.

The transducer is 100% waterproof; however, the receiver is rated IP-X7 waterproof. This rating means that it can handle rain, splashes, and even up to 30 minutes of complete immersion.

The entire unit is compact and portable, making it a good choice for fishermen who move their fishfinders from boat to kayak and back. You can use this device in all kinds of fishing environments.

The PiranhaMAX 4 DI Fishfinder is a great value because of its enhanced technology. It's a great tool for your kayak or boat.